connects to a (weak) public AP that has or does not have a Captive portal, and gives an Internet connection to the RV's router 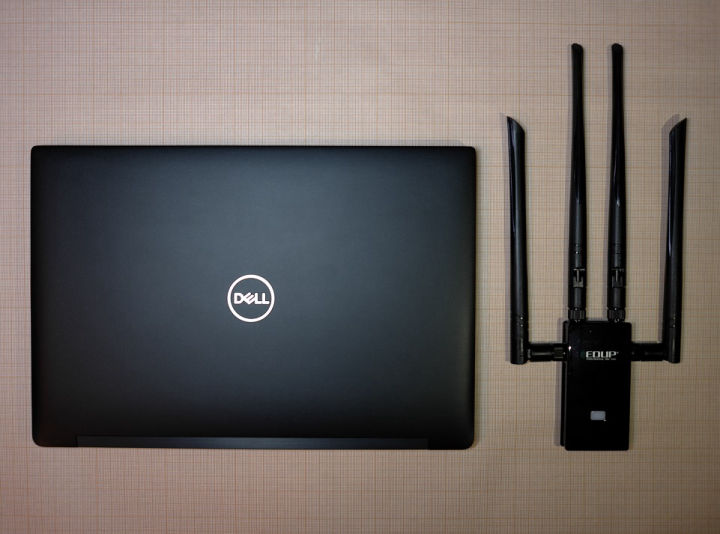 Most of times this cases are with Internet while the camping living:

In most cases, while starting connection to a public access point, an user needs to make some actions within interactive forms named "Captive portal".

Described here the easiest but expensive (Windows laptop is required) method of a much distance public Wi-Fi access is described. Later articles will publish other methods (with a Linux mini-PC usage), more difficult in realisation, but more flexible in customization.

EDUP EP-AC1621 dual band USB Wi-Fi adapter was used here. Looks like any other with analogous Realtek 8814AU chip will work in this manner without any changes. For example Alfa Network AWUS1900, Comfast CF-939AC and CF-917AC and some others likely have Realtek 8814AU chips.

Note: while testing, this adapter has shown important features - no matter what radio band in use for the Internet receiving (2,4 GHz or 5.x GHz), without special settings he broadcasts only in 2,4 GHz band on the 11 channel. As the 2,4 GHz band is long-range, this trait can be very useful for the camping living - the RV's router can connect to the extender's Internet on most long distances. Looks like most USB Wi-Fi adapters broadcast on the 11 channel of 2.4 GHz band. 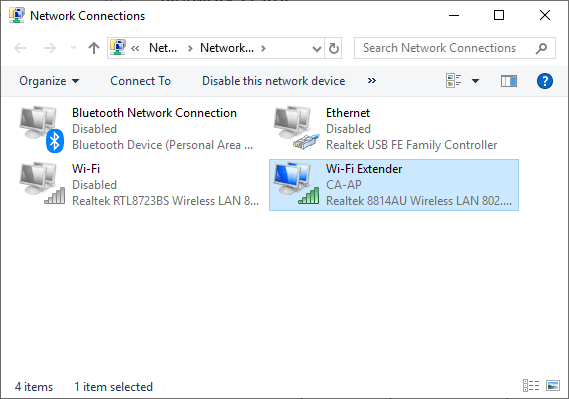 In some cases, depending on the laptop's devices, if the laptop has an integrated Wi-Fi board, then this board needs to switch off within Windows Network Connections. The easy way to launch Network Connections on a PC is press Windows key and then enter command ncpa.cpl. Then click the right mouse key on the icon of the integrated wireless board, and then click Switch off them.

Note: Mars WiFi is not the only program to make Wi-Fi hotspot on Windows. For example this digest lists some variants.

Next settings were trivial: 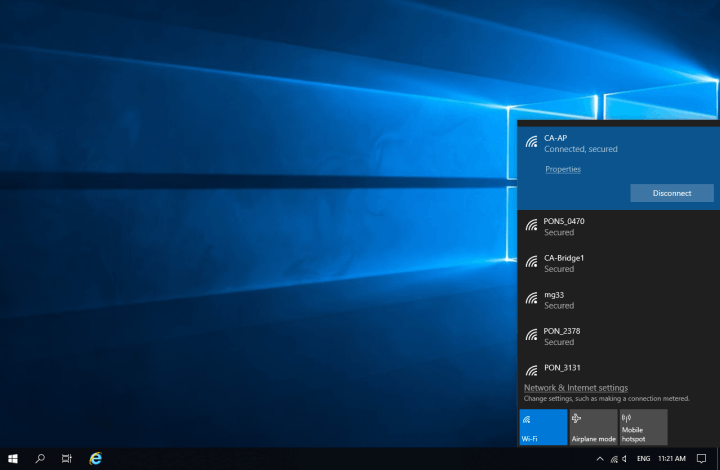 Connect to a public AP using the PC laptop. 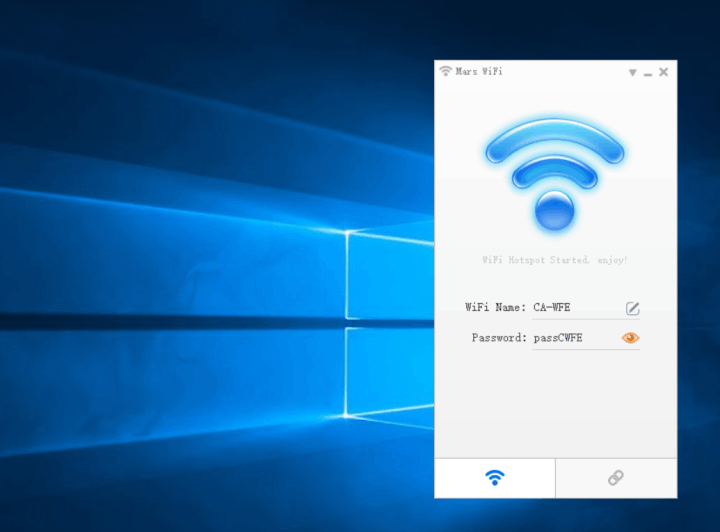 For Windows 7 PC with Mars WiFi installed only need to specify name (here is CA-WFE) and password of the new hotspot. 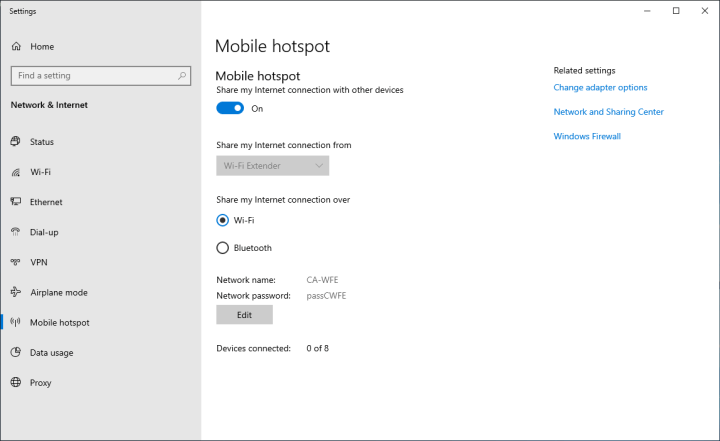 On Windows 8.1 or 10 via Windows Settings, then Network & Internet, then Mobile hotspot tab, only need to edit name (here is CA-WFE) and password of the new hotspot and switch on.

From this point, the laptop works as a Wi-Fi hotspot and the camper’s router can attach to this hotspot via the router's web face. Need to keep in mind that if no one client will be attached to a new Wi-Fi hotspot (deployed with Windows 8.1 or 10 inner utilite for Wi-Fi hotspot) for 5 minutes, this hotspot will be switched off automatically.

Now camper's crew gadgets can attach to the camper's router (AP of this router). In this case all assistants in the camper and all crew's gadgets will be in one network and discoverable to each other.

If no the camper's router has been deployed yet, the crew's gadgets can attach to the Internet via access point CA-WFE described here.

Each new place needs only connecting to a public AP using the PC laptop. The connections of crew's gadgets and of camper's assistants will not need new settings.

When Wi-Fi antennas of the camper's AP (router) and of the USB Wi-Fi adapter will being placed on sites, this considerations need take in account:

Attention! There are many USB Wi-Fi adapters on a market. When buying an adapter in one country from an official dealer, no questions about the use may arise. But while traveling with this adapter to different countries, necessary to comply with the regulatory rules of these countries for the use of Wi-Fi. These rules can vary. Some adapters have characteristics that provide all countries regulatory rules. Other ones need to change settings in some countries (usually this is adapters with extremely powerful Wi-Fi radios, and/or has use abnormal Wi-Fi channels as 12 or 13, 56, etc). These settings can be done in driver's parameters of adapters, but almost in every country by the road. While choosing a Wi-Fi device (adapter, router, etc) for use in a journey, necessary to keep in mind this aspect.

Troubleshooting: If all settings made on the laptop as described here, but Wi-Fi hotspot does not start work in Windows, in most cases can help the resetting of Windows network before repeated settings. For this need to make on the laptop (all applications need to be closed as laptop will rebooted here):

'Yes" in next pop-up window

Then in open terminal for Windows 10:

Designed with Mobirise - Try it